stupid question
after last tv program that made me angry
is there same bank which want to borrow little money to our poor entrepreneurs that Italian banks don't care a sh.... about ???

I know we can't bee too powerful but
wt we still need to be a marketplace
right?
we need to survive
let us to

You should address your question to;

Read what Mrs Thatcher had to say... she had Europe all wrapped up.... women before her time (as an Irish women, obviously I an NOT bias)

@it's me wrote:I again say
we still need
for them too
to keep being a marketplace
they would be stupid to kill us

Talked her out of politics' I thought we were only allowed to write here in the forum about George Clooney ....

it's a general thread
this one

When economy is growing (like UK has fastest rate in developed world), banks have more confidence in small business entrepreneurs or artisans. Perhaps these Italian entrepreneurs could seek financing from EU nations like Germany or UK.

Often after they experience level of success, multi-national corporations swallow them up.

During this recession, only hope would be finding venture capital, private-equity like angel investors, or maybe or a bank that may yield.

@it's me wrote:I again say
we still need
for them too
to keep being a marketplace
they would be stupid to kill us

Talked her out of politics' I thought we were only allowed to write here in the forum about George Clooney ....

In the George related threads the topics are pretty much kept on track relating to George.  We try not to go off topic and if we go too far afield, either Katiedot or one of the mods, like me, will ask that the thread get back on topic.

In the Party In the Kitchen section - these topics can be about anything as long as it's within reason.   What i mean is we don't want to start a whole section about an unrelated actor for instance and then set up multiple discussions about a different person that would be unrelated to George.

But we have topics of interest to COH users where we discuss other things which could include things like politics. heck I went off on a rant about the shutdown and debt ceiling just last week.

What we would prefer is that a topic that is general in nature not go off into discussion about for instance one of his exes since they have their own threads and keeping those comments in those topics allow those who do NOT want to read or discuss his exes the ability to come on here and not be inundated ad nauseam about an ex girlfriend in an unrelated thread.

Hey its my kidney transplantiversary!!! 1year down, lots ahead of me. Can I get some greenies from fellow clooney fans, but I am willing to accept a George kiss if that is not possible! Both is best! Thanks!

Congrats ktsue2002 all the best for you

Well done ktsue.....Hope you continue to keep well
and happy.

soooo nice baby!!! all his father I think

@ktsue2002 wrote:Hey its my kidney transplantiversary!!! 1year down,  lots ahead of me. Can I get some greenies from fellow clooney fans,  but I am willing to accept a George kiss if that is not possible! Both is best! Thanks!

Congratulations Ktsue...so your kidney is is a Libra ....Libra's ruling planet is Venus... so will appreciate this story I saw today.....

Kyle Froelich's kidneys were failing, and he'd been waiting for a good match—little did he know what his plight would bring him. He met Chelsea Clair in 2009; she'd heard about him, and almost immediately decided to give him her kidney. Froelich, then 19, and Clair, then 22, found out a month later she was "almost a perfect match," Clair tells the Indianapolis Star. As they supported each other through six months of tests and doctor's appointments, they grew closer. After the successful transplant, they became a couple—and on Oct. 12, three years later, the Indiana couple got married.

"There’s a bond that no one else, unless they’ve done it, can know," Froelich says. "She’s my best friend." They have an 11-month-old son and are also raising Clair's 6-year-old daughter. On each anniversary of the transplant, they throw a party—called "Sparkypalooza" because they've named the kidney Sparky. "He’s carrying around my kidney," says Clair. "I have to make sure he takes care of that."

TheMinis, I need a spoonful of sugar to make the medicine go down.  I thought she was real as she was a few of my favorite things. That's just supercalifragilisticexpialidocious!

Wow theminis what a lot of stuff on that page!  HA!

and in other news, the new guy cast as Christian Grey (a novel which I have not read and don't plan to) Jamie Dornan is married in real life to Amelia Warner who played, yes you guessed it, Lorna Doone in a 2000 film about that fictional story by R.D. Blackmore.

Just a little bit of trivia I picked up surfing the net... I posted about her not long ago on the Amazing Women thread:

She's actually more attractive now than in her youth.
Lived in poverty during her childhood.
Still working at 82 & involved in charities.

She is beautiful. She must have lots of books out there on "beauty secrets". She reminds me  a little bit of Emmylou Harris in that pic. Emmylou is 66.
For those of you who do not know Emmylou : 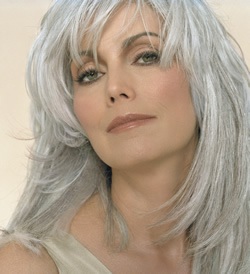 I have a thin layer of ice on my car this morning !
Bright and sunny though.

Oh I hate it when you got ice on the window. Takes forever to scratch it off. Winter is coming. But at least you got the sun

It is sunny here too. Only for the next two days and then the weather will change

Last day of uncomfortable month (work I mean). Glad they got (debt ceiling) an eleventh hour deal and threat has been averted, for now. So the path through the forest is widening and sky is clear, no visible dangers en-route.

And time for witch stories