» George, Grant and others on their sponsorship of two new Hollywood schools

Just an article about the name

The royal baby George Alexander Louis is only 3 days old, but he’s already causing controversy—not because of his parents Kate Middleton and Prince William, but because of his name.

Almost immediately after Kensington Palace announced the baby’s name on Wednesday, Twitter exploded with jokes on the similarities between the names George Alexander Louis and Jason Alexander; the latter belongs to the actor who played George Costanza on "Seinfeld."

Examples: @RandiChase: “I love how the royal baby was named after George from Seinfeld. Even if not true—I will believe it anyway.” @rutesperanza: “Royal baby named George Alexander. Seinfeld character was named George ...Played by Jason ALEXANDER! This has conspiracy written all over it.” @LindsayDunnCTV: “Who knew Kate & William were such #Seinfeld fans? Named the baby with a mix of Jason Alexander & his character George Costanza.”

The hype grew so much that even Jason Alexander weighed in. On Wednesday, he tweeted, “So honored that the future King of England will bear the proud and noble name of ‘George.’ Serenity Now!”

And while it’s (highly) unlikely that Seinfeld had any influence on Middleton and Prince William’s decision to name their baby George (in fact, royal experts told the Daily Mail on Wednesday that the name George Alexander Louis isn’t symbolic at all; rather, it’s simply a name the couple likes), the name George is rich in history.

The paper reported that it was the moniker of the patron saint of England and of Queen Elizabeth's late father George IV—and was a top bookie pick, ahead of James, Alexander, Arthur, and Louis. It was also the 12th most popular name in England. And on Wednesday the Associated Press, reported that six British kings have been named George with four reigning in a row.

Public opinion was firmly divided down the middle. Plenty were excited: @tam356 tweeted, “Yes!! They called the baby George!!!! I was right

Others turned up their nose: @GaryJanetti wrote, "Royal Baby was a better name," and TMZ founder Harvey Levin tweeted, “Royal Baby Name George Alexander… A Big Miss. What do you think of the name?”

Name expert Albert Mehrabian, professor emeritus of psychology at the University of California, Los Angeles and author of The Baby Name Report Card was surprised by the royal couple’s decision to name their baby George. In a previous study, he asked subjects to describe a stranger based solely on their name and the response to George was lukewarm. “The name doesn’t conjure an image of a fun, popular, masculine man, however, it does convey honesty and caring,” he said. “And the name Alexander scores very high when it comes to success.”

But in a world where baby names have become a competition for parents to out-weird each other — North, Blue Ivy, Apple, Cricket, Pilot Inspektor, and Rainbow Aurora — it's refreshing to see a classic name like George back on the radar.

I always loved the song from Johnny Cash

Prince William and Kate Middleton need to cut loose from tradition -- naming their kid George Alexander is right out of the royal playbook -- which dare we say is getting a little dusty.

We're not saying the royals need to steal a page from Gwyneth Paltrow and name the kid after fruit, but it wouldn't be terrible to give the kid a name that's a little more fun than "George."

But let's face it ... the most awesome royal name ever is not held by a royal at all ... it's held by a Jackson -- All hail Jermajesty! 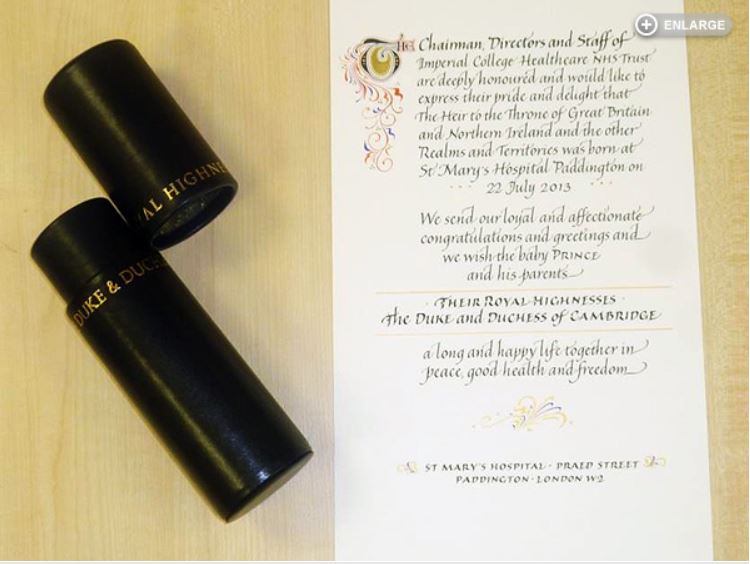 Nope, I didn't get anything like that either. My gifts were three enormous babes - and a series of what look like train tracks across my tummy as an extra bonus

I must have gone to the same doc you did PA-N! I've got those train tracks too! I did get a tiny blue t-shirt with the name of the hospital on it for my son. All I got was... nothing, except the bill!!!! Oh, and I got to take my son with me!