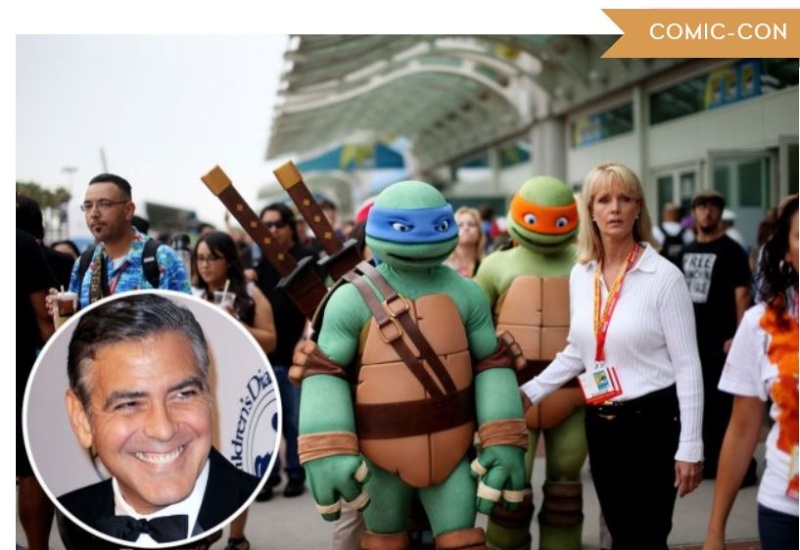 If the Super Bowl was held on Halloween in a stadium-size casino, it might be able to match Comic-Con in terms of sheer sensory overload, intricately costumed masses, and migraine-inducing mania. It is with this understanding, a Xanax prescription, and a laptop that your Hollywood blogger sets out on Thursday to the annual comic convention in San Diego.

While there, we will be documenting the most exciting and bizarre goings-on inside Hall H—the 6,500-seat thunderdome that is the Con’s nucleus— as well as the wildest costumes, pirate-ship-themed parties, and comically unnecessary merchandise available. Below, the people, places, and things we anticipate most this year.

George Clooney, Comic-Con’s Most Eligible Bachelor: No offense, Superman, but this year’s “Most Eligible Bachelor” title goes to George Clooney, the newly single Oscar winner, Italian-property owner, and all-around charming guy who will be in town to promote Alfonso Cuaró’s astronaut sci-fi thriller Gravity alongside co-star Sandra Bullock. We are wagering that the Oscar winner will receive at minimum two marriage proposals from two different immaculately costumed audience members. (If you would like in on this bet, comment in the space below.)

Jennifer Lawrence’s First Public Appearance Since the Oscars: It seems like only yesterday that Jennifer Lawrence was tripping her way into our hearts at the Academy Awards’ podium. And while Jack Nicholson will likely not be on hand to terrify the reigning best-actress-Oscar winner—although we welcome it—there is a good chance that the adorably awkward Silver Linings Playbook starlet will inspire another viral-video classic while at the podium to plug Catching Fire, the Hunger Games sequel.

Godzilla, Literally the Biggest Star at the Convention: Once a sacred convention for diehard comic fans, Comic-Con is now also a major platform for Hollywood studios to shamelessly promote their upcoming blockbusters. Impressively, Warner Bros. has gotten a head start on the action by shamelessly promoting the shameless promotion it will do this weekend for the studio’s Godzilla reboot. In addition to a teaser video from Godzilla director Gareth Edwards promising something “very exciting” at Comic-Con, the studio has already decorated a building in downtown San Diego with Godzilla graphics, created an entire Web site devoted to tracking the monster on his way into the city, and planned an interactive fan “experience” for Wednesday night. If W.B. delivers on what it promises, Godzilla could be the most towering presence this weekend.

Anniversary Overload: As if it were not daunting enough to keep track of one anniversary a year, fans are being asked to juggle several anniversary celebrations this weekend. Among them: Bazooka Joe’s 60th, Doctor Who’s 50th, Transformers’ 30th, The X-Files’ 20th, Pinky and the Brain’s 20th, Hellboy’s 20th, and The Walking Dead’s 10th. Unlike most of his anniversary-fêting peers, Superman will be toasted with more than a simple panel—the 75-year-old DC Comic superhero will get multiple daytime events, a red carpet, and an anniversary soirée at the Hard Rock Rooftop bar. Maybe this will make up for that disappointing baggage-claim party that the city of Cleveland threw for him earlier this year.

Long-Awaited Reunions: At long last, Veronica Mars heroine Kristen Bell, director Rob Thomas, and the estranged CW cast will be seen together again—to promote the long-awaited, Kickstarter-funded film adaptation of their beloved teenage-sleuth series. Also reuniting for old time’s sake: The Amazing Spider-Man cast, to chat about their Spidey sequel; Gillian Anderson and David Duchovny, for the aforementioned X-Files anniversary; and your blogger and the free Ghirardelli samples available near the convention center. It will be magical for sure.

Game of Thrones Frenzy: In addition to the annual, manic Game of Thrones Hall H panel, HBO will be hosting an exclusive tasting of the next official Game of Thrones beer, Take the Black Stout, on Thursday for press/bloggers who have been inexplicably obsessed with the medieval series and the $30,000 replica throne it inspired. Cast members expected to turn out for the festivities: Peter Dinklage, Emilia Clarke, Michelle Fairley, Kit Harington, John Bradley, and series creator George R. R. Martin.

Pet, Pirate, and Playboy-Themed Parties: Each year, studios, networks, and other fan-culture-geared entities throw competing parties on Comic-Con’s prime partying nights: Friday and Saturday. While Entertainment Weekly, Summit, HBO, and FX will once again host their well-executed Comic-Con carousings, several other invites have piqued our interest. Among them: the Petco Park Star Wars–themed “Yappy Hour” on Friday—during which Comic-Con guests and their dogs are invited to mingle with Darth Vader and Chewbacca and have caricatures drawn of both them and said pets. In a nearby transformed parking lot, Playboy and Kick-Ass 2 will co-host a 21- and-over party. While most other soirées are staged at rooftop bars, French video-game developer Ubisoft is celebrating its latest title, Assassin’s Creed IV Black Flag, on “a real-life Jackdaw-inspired pirate ship” in the San Diego Bay. Also doing some seaside entertaining: TV Guide, who has torn a page out of the Cannes playbook and booked a yacht.

Metallica and Other Miscellaneous Comic-Con Guests: Strangely enough, Hall H will get a taste of heavy metal when Metallica arrives on Friday to promote its 3D film Metallica Through the Never with a panel and a performance. (Later in the weekend, the band will perform an impromptu concert.) In other surprising-guest news, congressman and civil-rights leader John Lewis will be on hand to promote his graphic-novel trilogy March; Mary Ann from Gilligan’s Island (Dawn Wells) will plug a senior citizen slasher thriller, Silent BUT Deadly; a Star Wars origami master will hold court during a panel about his craft; and terrifying Sons of Anarchy actor Ron Perlman will moderate a panel of costume designers called “Poppin’ Some Tags.”

A-List Appearances: In addition to George Clooney, Sandra Bullock, and Jennifer Lawrence, Tom Cruise might appear for his futuristic sci-fi film Edge of Tomorrow, Julianne Moore is confirmed for her fantasy action adventure Seventh Son, Hugh Jackman will show grizzly face for The Wolverine, and several special guests are expected for 20th Century Fox’s mystery panel, which some speculate will tout X-Force, the upcoming X-Men offshoot.

Costume Cavalcade: Realistically, if you are in the San Diego area this weekend, you don’t even need a Comic-Con badge for the entertainment. Just park yourself near the Convention Center and watch as packs of Coners in heavy makeup, sexy Princess Leia get-ups, Spider-man-chauffeured pedi-cabs, and all manner of painstakingly constructed costumes circle the city. The daytime people-watching, however, is just a long preamble to the annual Comic-Con International Masquerade, which awards the best-dressed attendees with cash prizes. Attendance is expected to be so staggering that programmers have booked overflow ballrooms.

For VF.com’s Comic-Con coverage, stay tuned to our Hollywood Blog through Sunday and follow @juliewmiller and @VFHollywood on Twitter.

Never heard about Comic-Con. It is big in the US that he promotes the movie there? Or is it because the movie is so "out of space" LOL

He'll enjoy this event, I imagine.

Comic Con a huge deal, that's really all I know. Im assuming hes going because Gravity is a sci fi type of film.


More than 125,000 pop-culture devotees are expected to invade the San Diego Convention Center — many costumed and transformed into their favorite characters — to let their nerd flags fly for the hottest upcoming movies, TV shows, comic books and much more. The event, whose origins date to 1970, runs Thursday to Sunday.

Comic-Con's popularity still takes some by surprise, including Aaron Eckhart. "I went there for Battle: Los Angeles (in 2010), and I didn't have any idea that people were so fervently into their films, and there were whole families in costumes," says the actor, who this year will present footage from his I, Frankenstein(out Jan. 24).

But geeking out with like-minded folks is the best part for Diesel, who's there for the first time in more than a decade with his film Riddick (Sept. 6). "You are connecting with true fanboys, and you are speaking to that core audience."

Comic-Con's growing prominence allows it to attract huge celebrities — and we don't just mean Godzilla, though the monster will be there with a new movie, too. A-listers Hugh Jackman of The Wolverine (July 26) and Sandra Bullock of the sci-fi drama Gravity (Oct. 4) will be on hand for their movies. Sullivan Stapleton, Eva Green and Rodrigo Santoro will tout 300: Rise of an Empire (due in March). Joss Whedon, the unofficial king of Comic-Con, brings the new show Marvel's Agents of S.H.I.E.L.D., which takes the world of superhero films to HD TV this fall. And The X-Files stars David Duchovny and Gillian Anderson are back together for a special 20th-anniversary reunion panel.

Even the heavy-metal rock gods of Metallica will be there to promote their movie Metallica Through the Never (Sept. 27) and play a secret show. Maybe that's the real revenge of the nerds — if Metallica shows up at your party, you're really cool.

The best part for many is the surprise appearances. Marvel Studios is famous for pulling superhero rabbits out of its hat. At the 2010 gathering, the entire cast of The Avengers assembled on a stage for the first time. With a panel for The Hunger Games: Catching Fire (Nov. 22) on tap, one could fathom a visit from newly minted Oscar winner Jennifer Lawrence, or perhaps Bullock's Gravity co-star George Clooney. Like many attendees, he put on a Batman costume once.

Some, such as British director Edgar Wright — who's doing a panel for his comedy The World's End (Aug. 23) and hosting a fan screening in town — go all out because Comic-Con simply means a lot to them, too.

"It's why studios go there with films," Wright says."It's actually a way for filmmakers to intersect with fans that you can't in other situations."

and.... Comic Con also has a children's film festival i am going to try to get Onyx Fire in there next year!!

Comic Con used to be just a little convention for geeky guys who were into comic books and science fiction.

Hollywood invaded some years back and now it's a big deal.

Well at least that means he'll be in the West coast this weekend. Whoo hoo!

...and a chance of some more pictures

You are so lucky LornaDoone he is back at your timezone

Yes Comic Con is a big deal It took place here in New York down the block from where I live there were hundreds of people lined up . People were dressed as comic book characters.

Sandra attended.
So the media generated publicity that he would be there & gave more exposure to him & the film....
Well, he was there: on celluloid.

Yes, the dress is gorgeous.
First thing that caught my eye. Especially the black back panel contrast.
She's very fit:
"They had me strung up on wires for eight to nine hours a day,” Sandra shared about filming the flick..

George too, I hope.

Hard for a body to sustain that stress, I guess