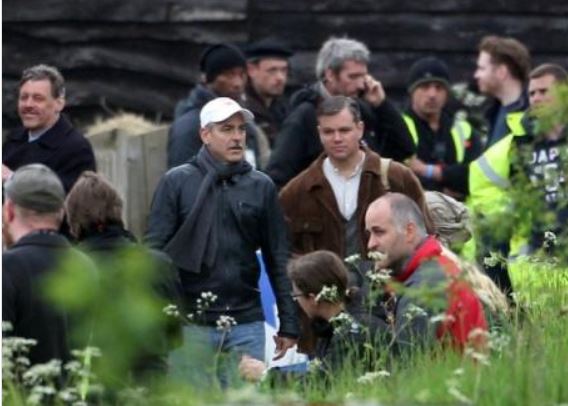 Fingest was the location for The Monuments Men, which is set to hit cinemas in early 2014.

It is also directed by Mr Clooney.

The MFP understands that the Chequers pub in Fingest was used by the film crew, though its landlord declined to comment.

The movie is described as being about a crew of art historians and museum curators who, in a race against time, unite to recover renown works of art stolen by Nazis before Hitler destroys them.

The production crew and stars were in Fingest on May 31.

The Hambleden area has become a popular filming location for film and television, with close links to London, but also its beautiful landscapes.

Shows such as Endeavour, Morse, and Poirot have been shot in Hambleden village, which is used about six times a year used for filming.

Scenes from Chitty Chitty Bang Bang were shot in nearby Turville.

Not sure if this is new news or not

I think they were filming there before the week spent in Rye.
We really need a Timeline now !

Okay, found article re Rye dated 7 June, then the one above dated 9 June, and in the link it mentions they were in Sussex the week before, so totally confused but thought that since there are a lot of tweets regarding George moving from Rye to Fingest, figured it was new.

Above is another link with nice video of area and I think you are right, Fingest is so last week.....

Don't know if they're back there, tho Bob Balaban's of last night certainly shows English countryside prbably back on the agenda.

Somewhere on here , Themi, is a post from me about the whole area which has been used for loads of filming e g Midsomer Murders, Foyle's War, Endeavour and the village called Turville just along the road was the base for 'The Vicar of Dibley' tv series. Very very nice pub there.....

@Katiedot wrote:Sorry - I'm just swamped at work and haven't got round to updated the Where Is George thread in months

Oh no Katie....not having a go.....it was a lighthearted comment from the top of my head first thing in the morning.
I'd forgotten you'd done that thread....CRS. Lol

Above is another link with nice video of area and I think you are right, Fingest is so last week.....

Lovely video of the village.
I can just see George living there in his dotage, in a thatched cottage, popping in to The George with his dog for a game of Dominos !

Some author tweeted earlier this:

OK, so we've seen George Clooney in the flesh - he was standing so close my wife could've groped him. Can't say my universe has changed tho

He tweeted this a few hours before

@ridzy98 Thanks Terry! And thanks for following. I'm down in Winchelsea.

I know SG, saw plenty of George spotting tweets but no photos!!! bugger

Just saw last weeks snaps from Rye.....Thanks to everyone they are amazing...So good to see a Master at work, and so chilled!
MORE PLEASE ...x

@Joanna wrote:I think they were filming there before the week spent in Rye.
We really need a Timeline now !

Believe this is old. Matt Damon arrived in Berlin with Sharlto Copley and Neill Blomkamp over the weekend to promote his new movie "Elysium" . This interview was done yesterday (you can see a little video as well) it is all in German Sorry. He was for over an hour in the building yesterday of the news magazin. But they only released the interview today.

After filming MM in Rye until 2 am, Matt was in London on Saturday for Elysium promotion and then in Berlin on Sunday for the same purpose.
Apparently he's promised his wife and girls the rest of the year off when it's all finished !

HU! Great for them all

Aaaaaah he is so sweet .

Mmm. Apparently there's no nanny, so he feels very guilty. But he's back in NYC for a university discussion on June 17.

And I see that Emily and John Krasinski stood in for him when his dad attended a charity event.....very nice

@party animal - not! wrote:Mmm. Apparently there's no nanny, so he feels very guilty. But he's back in NYC for a university discussion on June 17.

And I see that Emily and John Krasinski stood in for him when his dad attended a charity event.....very nice

If this is true that he has to be back in NY by the 17th June maybe the filming is coming to an end now. One of the security staff said 3 weeks london And 2 weeks berlin to finsih off everything. He said that on the 21. May and GC left Germany on the 22. May. That means 3 weeks are over tomorrow

If that is all true GC should arrive in Berlin this week to finish off everything.

If not than the surity guard talked rubbish and maybe it's true and it is 5 weeks UK . Maybe they did 3 weeks filming and now the last two weeks is just finishing it off. And MAtt damon doesn't has to be there for that.

Do you get me?

Well let's see what happened next. So exciting

Could just mean that Matt Damon has finished for now.

Media for the film on twitter says HisNibs is in the UK for five weeks, then Berlin....

@party animal - not! wrote:Could just mean that Matt Damon has finished for now.

Media for the film on twitter says HisNibs is in the UK for five weeks, then Berlin....

Ok I can wait for another 2 weeks until he comes to Berlin. Ats long as he comes LOL

@party animal - not! wrote:
And I see that Emily and John Krasinski stood in for him when his dad attended a charity event.....very nice

On June 4th in Boston