So they've all stayed in Cambridge over the weekend perhaps........

Oooooo.....maybe the boys will go punting in Cambridge next.

Fun but not a total adrenalin rush
.....unless you fall in.


As director of the forthcoming film Monuments Men, George Clooney doesn't have to do much to get attention.
However, he looks like he'll be commanding attention both in and out of character in the movie as he was dressed as an army officer.
George, who is writing, directing and acting in the World War II drama, took his project to Cambridgeshire, as he was joined on location by co-stars John Goodman, Matt Damon and Hugh Bonneville.

The Hollywood stars were joined by dozens of extras as they shot scenes at the Imperial War Museum in Duxford on Monday.
Although George, Hugh and Matt had been seen filming last week, Monday marked the first day former Roseanne star John was seen on set.
He was dressed in a green army uniform as he followed his superiors - played by George and Hugh - around on set.

At one point, they were joined by young extras, who looked ready for battle with their guns in position.
The film is co-written, producer and directed by Clooney, with the script based on the book The Monuments Men: Allied Heroes, Nazi Thieves and the Greatest Treasure Hunt in History by Robert M. Edsel.
Set during World War II, it tells the story of an Allied group who were responsibly for saving pieces of art and other significant cultural items from the Nazis during World War II.

Matt takes on the role as the late James Rorimer, who was the director for the Metropolitan Museum Of Art in New York.
In 1943, he put his Met career on hold to sign up as a infantryman in the United States Army, but soon found his art skills being utilised during the war when he headed up the Monuments, Fine Arts, and Archives program.
He was personally responsible for seizing the artworks of Nazis Hermann Göring and Joseph Goebbels during the war.


While George is also in the film, as a character called George Stout, Cate Blanchett and Bill Murray also star.
George and co have also been spotted filming across Hampshire, Buckinghamshire and Surrey.
In March and April, they also shot scenes in Germany.
Monuments Men is due for release in December 2013. 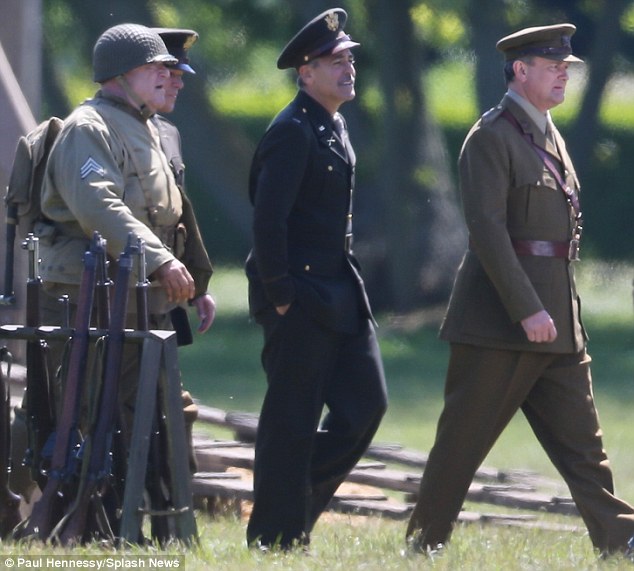 Better go and remind myself what John Goodman's role is now I can see him in uniform.Obviously a sergeant. Also Dimitri Leonadis looks like the young driver, and I think Jean Dujardin's there too

Back to the book!

SillyGirl thanks so for this artiicle & pictures.

PA-N remind me too who everyone is playing. I wish they would update IMDB. Anyway they changed the article to a more Hugh Bonneville slant....there is another more casual photo too of GC on there.

For some reason twitter is acting wacky...the embed button has disappeared. 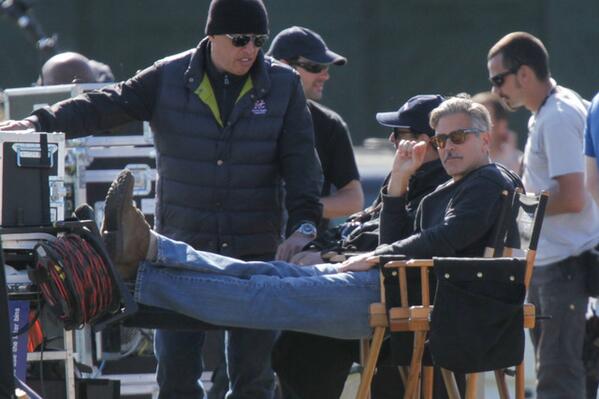 Amazing set of photos with Hugh Bonneville & his wife visiting the film set.

And the UK weather has been sunny & in George's favor.

Some amusing ones too. Clooney, Damon & DuJardin look amazing!
And John Goodman adds rather comical element too. Great actor. Loved him in Big Lebowski

Thanks for the pictures. I love them 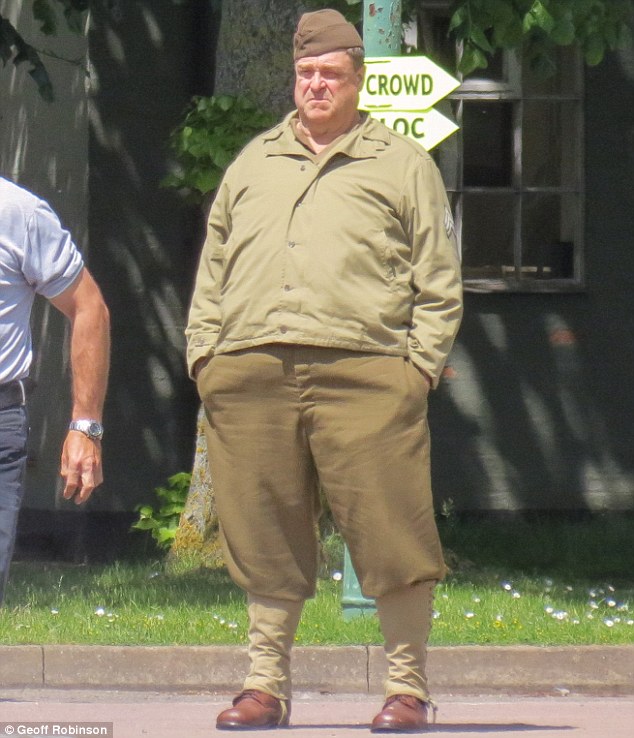 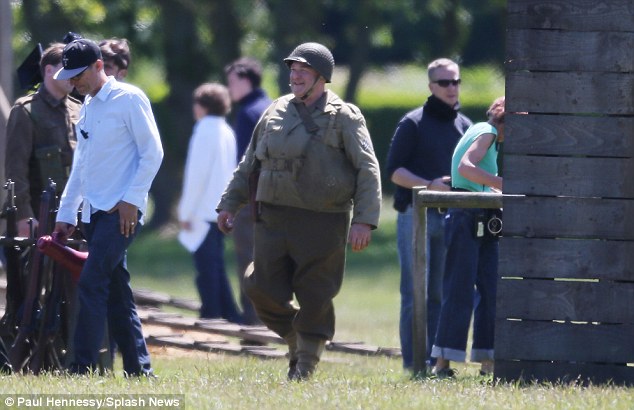 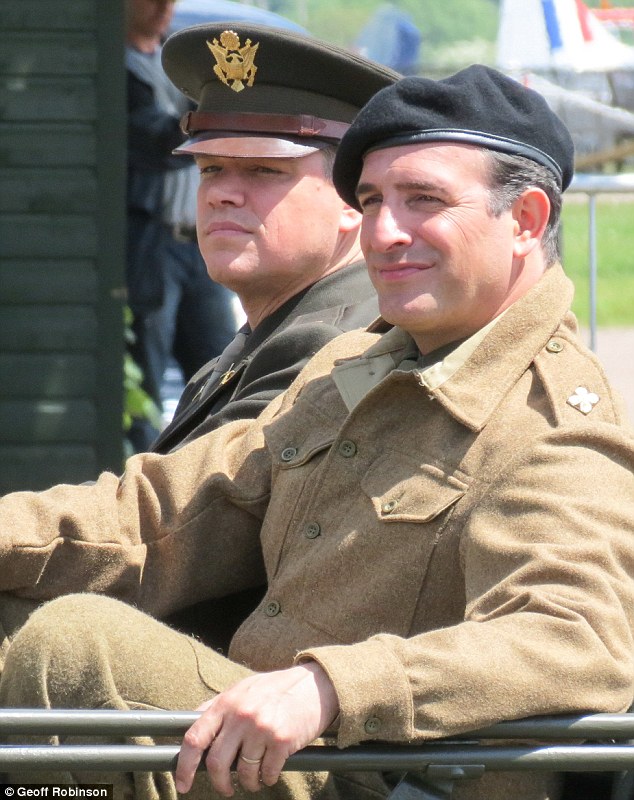 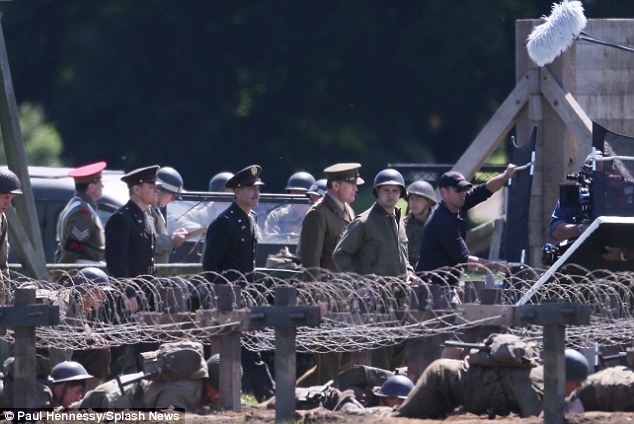 it would be funny to see

Great pics! Thanks all!

Gio looks so rugged and quite fetching, hmm maybe George has some competition HA

There's a few of us who get really excited about Gio. Yum!

George looks good with his feet up, relaxing in that directors chair.

Yeah.... Too much relaxed

Just seen these pics on the Daily Mail page and someone left a comment to say that the helmets used in this shooting were WRONG! Quick! can someone read this and tell Georgie before it's too late??? Better to change it now than cost extra? Don't be a laughing stock my love, get it right now, you're a perfectionist sweetie! Let's hope your "staff" read all the comments, but hey, if you have to come back to the Uk again, we don't mind!!!!

Oh Kentucky dude, you did it again !

Well, if he has got the helmets, the Imperial War Museum's the right place to be for advice........

He ordered the uniform and helmets. It may be a mix up by the company who made these. I also think that he was trying to get some of those air planes when getting those vehicles. Think just the vehicles came, while in Germany, but it seemed as if there were some delays on that. I noticed the earlier articles on that back in March and April.

England had the museum tho so guess thats why so long there now. But you know how some companies get it wrong on what you order, half the time.

May be also doing some of the shots he would be doing in france, if there are some places where it could happen.... the beach scenes? Landing troops?

Here's a link for a couple of pictures, #3 believe me is to die for.

Really serious in #3
Amazing in everyone! Love those pics, thanks! 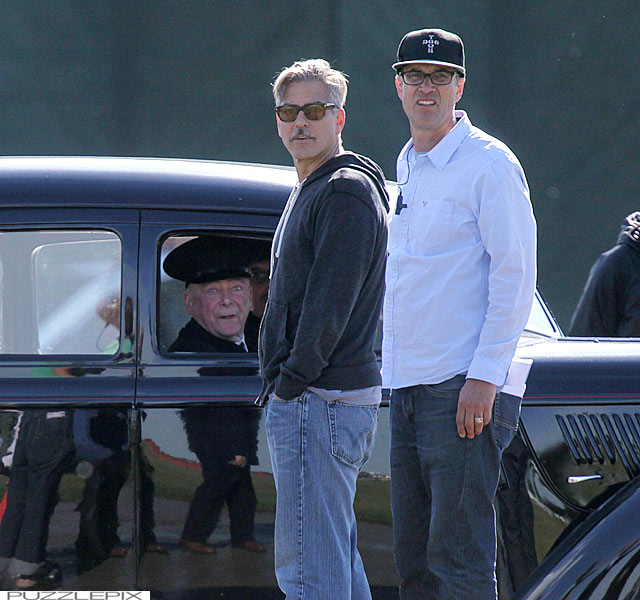 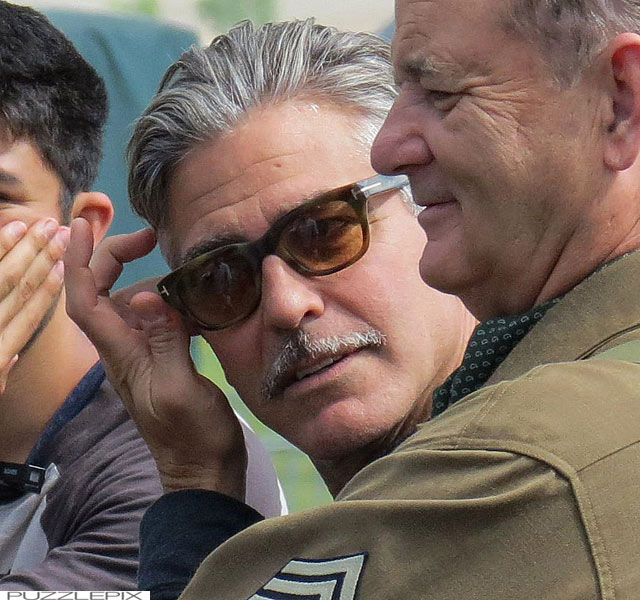 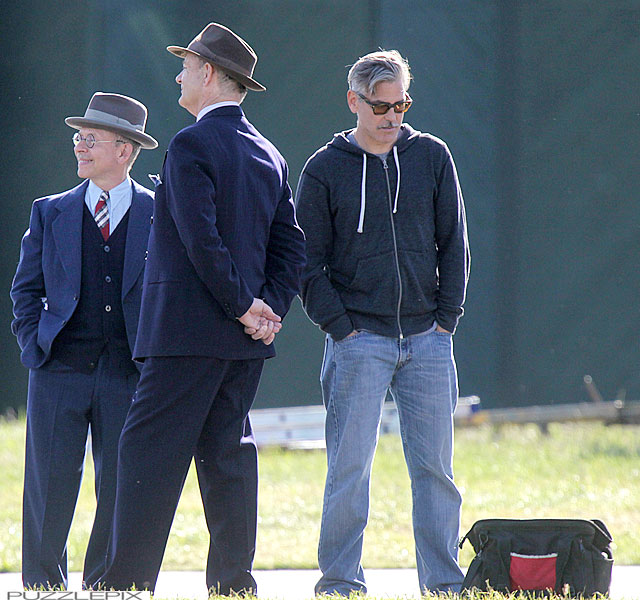 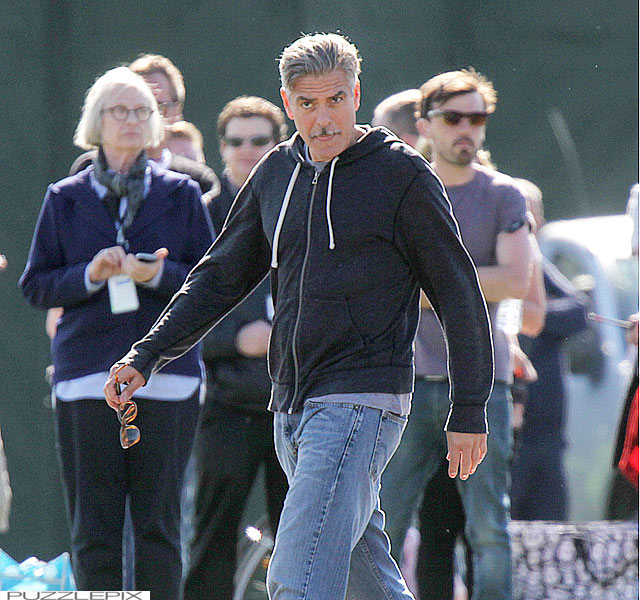 I've found this on the facebookpage of Augusta, Kentucky. His papa is also very much into the wartimes. Clooneys never stop working.

" Nick has done dog food and beer commercials, played a monster on late-night TV and hosted variety, teen dance and game shows. His resume includes deejay, cable emcee, news director/anchor/reporter, columnist, actor, author, proud father of one of Hollywood's most bankable stars and brother of one of America's most beloved pop singers.

Nick Clooney has been celebrating 50 years plus in broadcasting these past few months in a remarkable career that started at age 16 when he signed on WFTM, Maysville, Ky., in August 1951. His golden jubilee year gets a send-off June 22 with 'A Night for Nick'' gala at Music Hall benefiting the Kidney Foundation of Greater Cincinnati.

Clooney is hardly retiring, still adding to his resume and busy working on his second half-century of broadcasting.

'Nina says, 'I thought this was the time we'd be in the back yard digging parsnips,''Clooney says with a chuckle, flashing the trademark twinkle in his eye.

That's hardly the case. Among Clooney's current endeavors: He makes the 45-minute commute at 5 a.m. from his Augusta, Ky., home to host his weekday radio show on WSAI-AM -1530) and continues to write three columns a week for The Post.

He has just taken on the job as prime-time host of nostalgia cable network Goodlife -available in the tri-state market only to Adelphia cable customers). He is working to syndicate weekly editions of the two radio features he religiously produces himself, 'Movie Music' and 'In the Company of Heroes,'' his conversations with World War II and Korean vets -with vets from Vietnam and the Gulf War to come). "

But are those new or old stuff?

@Mazy wrote:Here's a link for a couple of pictures, #3 believe me is to die for.

Great photos on that Hungarian link. Thanks.
Yes he's in deep reflecting mode in #3.


And showing us his tongue too, in another one