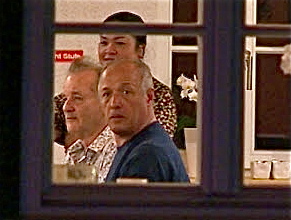 Keeping that look on his face in mind...cue the "shark attack" music...

Well, I say, my birthday twin can celebrate our birthday any way he wants. Deep down, I know he is wishing me a Happy Birthday! LOL

@phys major wrote:Agree oofoof he is looking a little creepy..and dare I say...GAY..LOL!!
The video wasn't on slow mode he was drunk out of his mind !!!

Love how attentive Gio is with George.

@phys major wrote:Agree oofoof he is looking a little creepy..and dare I say...GAY..LOL!!
The video wasn't on slow mode he was drunk out of his mind !!!

How exactly does "gay" look?

Do you mean "effeminate?" And if so, where (in the video)?

It's only a joke

About his gesture
While putting his t-shirt into his jeans

But it's only a way to tease him

You don't have a problem with me saying he is looking creepy but gay u do why?

I know what "creepy" looks like. But "gay" has a lot of "looks," including no "look" at all, which is why I asked if you meant "effeminate." And if that is what you meant, I'd like to know where it is in the video.

I have lots of gay friends so while I know you didn't mean anything Phys Major I'd have to say I do think there's a difference between calling something "creepy" vs. "gay." By comparing the two it's like saying being gay is creepy, which, at least in my small world, it is not. I know people are using the word now in slang and I must admit it bothers me and I know it bothers my gay friends.

When I said yikes about the video, it wasn't because I thought it made him look "gay." I thought he was drunk off his ass and that he didn't look or sound his best. He reminded me of guys who hit on you in a bar and don't know when to stop. But, like Way2 said, in that short video, there's simply no way to know anything! He could just have been so damn tired that with a little vodka in him he was very relaxed. He just didn't sound like the George I love.

I don't see comments about George being drunk as criticizing him, I see them as people just making observations.

I think it's hysterical when he comes out of a dinner or a bar sloshed. Makes for a more entertaining George.

He seemed in a very good mood, that seems why he answered the woman about her jeans so friendlily, but didn't want to be touching her person. Thats George. He pats you when he wants bit wont do it on cue like using a marker or pen on you. Think he's had past experience with that and maybe it didn't turn out so well in the past. Just seemed a little tipsy to me. Walking fast enough seemed to me. And yes, Gio is very protective of George. Both vids show that. Protecting him from a possible mobbing of touching him. Love the way he always tries to be good to his fans.

That voice says " here or here " with Gio pointing not belong to G , GC adjust his T shirt not even speaking when that voice start ! and he can't be speaking this way to his hostess "the owner of the place" that 'd be awkward and rude unlike G !especially she is not his friend and he didn't know before or for along time !

Even if George was drunk, why not, he is celebrating his birthday so nothing wrong with that and Gio was doing his job, protecting George and ensuring he got in his car ok. Wonder why his shirt was untucked?

I did laugh at the girl who asked George to sign her cheek and he said no but touched her arm and she got all giggly ooh he touched me, I think he was smiling then when he was getting in his car, a lucky girl

And Giovanni got him out of the damn TRASH!

I don't understand all the negativity about George having some drinks and dinner on his birthday. We are his fans not his enemy. He is not going to over indulge when he has Monuments Men to finish. He even worked the day of his birthday, that's what is important for him right now. Not like he is going to be driving, I thought he looked fine. He needs to relax a little now and again, but did not seem drunk.

Other people go out and get drunk every weekend or what ever their schedules are, no problem. George has a few and it's the end of the world. I'd love him either way.

I don't think he looked "drunk off his ass" at all. Nor like "a guy
who hits on you in a bar."
He was very gentlemanly about not wanting to sign the young lady's
jeans and concerned that she wasn't offended. So he looked to me quite the opposite to that description.

I also think he's wise not to sign anywhere on a girls anatomy ! Lol

I think George is one of those fellows known as a "happy drunk." NOT saying he was drunk here, just that from what I've seen of footage of him, when he has a few, he gets really jolly and maybe a little mushy. I think it's great! Better a happy drunk than a sad one, eh?

Tell me why most of you insist on the drunk side?

I don't find nothing good in it

I'm procrastinating doing an annual report......
it's me -
Maybe drunk is not the right term to apply here, altho for me, drunk doesn't always have a bad connotation. I agree with some previous posters that George appears to have had a few drinks in the videos. Hey, great! Happy Birthday to you! I'm a firm believer that if you work hard, you should play hard, just don't harm others or break any laws. George appears to be doing neither here. And he's got his trusted friend Gio to watch his back. So George being drunk or tipsy or a little inebriated is a total non issue for me.

It was his birthday so he had a few drinks to celebrate, He seemed fine to me and happy not problem.

Drunk doesn't have any bad connotations, It's Me. It's simply a way to describe a person who's had a few alcoholic drinks which is what I think George has done.

To me this word has a bad connotation

Honestly I don't think he was that bad---I have seen him look worse. I think what makes it seems he is unsteady on his feet is the end of the video. Gio pretty much grabs him and throws him in the car. Watching it again I think I see where Gio got concerned. A photographer came up behind them ---if you look carefully Gio pushes the camera guy out of the way then grabs GC. Gio was just doing his job.

I'm sure of that

I noticed that Gio has a very sexy voice !
Has anyone been in his company and heard him talk ?
Or has he ever done an interview ???
I would doubt that of course....just living in hopes.

everyone has to do his/her job

Gio has to do his job

I have to do my job

I had to do my job

Have to say that I think that His Nibs and Grant Heslov seem to wear their huge responsibilities of invested money, working with foreign studios and huge casts with some degree of ease. From what we can see it's a very happy set. They clearly love what they're doing - and even manage to leave the director's restaurant birthday meal by 10 30 pm.

They all need to rest

that is what Lake Como is for!

Mmm, sometimes. But of course they have the editing studio there too.

Lovely place to work, tho. Not a bad place to have the office!

I'm glad he enjoyed his birthday beer in Germany

Natascha, are any of his varied locations near to where you live? That would be so cool if you were close!

I think, it was a good funny everning.
Happy birthday, George, once more.

Unfortunately his locations are too far away from me to get there.