Don't know if this is the right thread for this or not but here's Lainey's take on the video:

It's as good a place as any. Here's Lainey's take on it:

George Clooney and his best friend Rande Gerber are now in the tequila business together. Their label is called Casamigos. And they’ve released the first ad featuring themselves and their women...

Stacy is to George as Cindy is to Rande, and he’s willing to put it on film as an emblem of his company, in which he’s invested a lot of money. Please. Give this girl the game ball. She doesn’t want marriage, or babies, and, you know, she’s content to not speak, if that’s what it takes. Everyone else gets a line but Stacy, Stacy’s good just looking good.

Have you ever seen this photo?

She is now his common law wife...can't wait for that palimony law suit when they finally end this thing...

She has now been immortalized as his common law wife...nice going George!!!


Who wouldn’t want to do a few shots of tequila with George Clooney? No need to answer that question.

The Oscar winner strolled into Hakkasan at the Fontainebleau on Tuesday night, and the crowd at the bar literally parted.

Clooney was there with his business partner and longtime friend, night-life impresario Rande Gerber, to talk about their new tequila, Casamigos. Along with another partner, Mike Meldman, they’re on a national tour — and as you can imagine, they’re being received well.

Clooney said that at first, the booze was intended for friends and family. “We were always looking for the perfect tequila and we could never find it, so we said, ‘What the hell? Let’s give it a shot and make our own,’ ” he said. “I’m not just endorsing this. It’s ours. … I even crushed the agave with my own feet.”

Not really. Clooney is such a jokester (not that we would mind his toes in our cocktail).

The pair traveled to Jalisco to meet with a distiller. Rough gig: They tried roughly 800 samples to get the recipe right.

“The distiller told us, ‘You guys are a pain in the a-s,’ but you know what you really like,” said Gerber, who is married to Cindy Crawford with two kids. “We perfected it. We were so specific.”

The boys like either their blanco (aka silver) and reposado (aged longer or “rested”) served up the same — on the rocks.

“This stuff is so good you don’t need to mix it with anything,” Clooney said of the 80-proof batch. “No lime, no salt chaser.”

Though the men claimed that Casamigos won’t give you a hangover, Clooney does have the perfect cure.

The two friends apparently have a higher tolerance than most.

“I can’t tell you how many times we sat and drank an entire bottle. We’ll open it and the next thing you know it’s gone,” explained Gerber, who also launched Caliche Rum last year. “We’ll say, ‘You know, we could drink another one, but maybe we shouldn’t.’ ”

Speaking of the bottles, each comes with the two guys’ signatures. Not a bad keepsake. Expect to see Casamigos on shelves in local, high-end liquor stores in a few weeks (it’s currently sold out) and behind the bars at the Fontainebleau and Whiskey Blue at the W Fort Lauderdale. A promotional video costarring Clooney, his girlfriend, Stacy Keibler, Crawford and Gerber is going to be rolled out this week. Clooney promises it’ll be “a little dirty.”

immortalized?
internet already did it
anyway

some help for a responsible use: a new app Drinking Mirror

The reality is you drink to much you look like shit!!!

Is the photo from drinksmarter.org IM ?

@phys major wrote:She is now his common law wife...can't wait for that palimony law suit when they finally end this thing...

Maybe they could make a skit out of it???

Phys why are you saying she's his common law wife? Or did I miss some comments and this is a joke? This thread has gotten kind of hard to follow.

FINALLY Stacy and Cindy are on board too:

I literally just checked her twitter page and it wasn't there. Didn't someone just post that she hasn't tweeted about it. Bet she is at the event tonight.


Oh and the Casamigos twitter page has lots of new tweets today.

Yep, think so too

@noodle wrote:Phys why are you saying she's his common law wife? Or did I miss some comments and this is a joke? This thread has gotten kind of hard to follow.

I think that was meant as a joke. I don't think common law wives are recognized in California. If they were George would have had several. LOL

And just 'cos I can, here's Casamigos tweeting us:

So they have been reading us. Great job Katie!

@silly girl wrote: So they have been reading us.

Only because I tweeted at them.

@silly girl wrote:(oh and not to make this about SK-----she tweeted 20 minutes after pandabear questioned her silence)

Co-inky-dink (to quote Ted Casablancas). We've been wondering for two days why she and Cindy seemed to be uninvolved.

Hopefully they saw something on my showcase

if anyone is reading this i have a showcase i am trying to get off the ground but it needs a lot of help i would appreciate a great deal if i could get Enough project to back me or george himself ( not like that will happen ) but if it's at all possible i would love to talk to john prendergast or someone in the Sudan movement i would love for some support or backing from someone
https://www.facebook.com/showcase4sudan?fref=ts

sorry katie for my self promo ahem
now back to the regularly schedule program... as you were 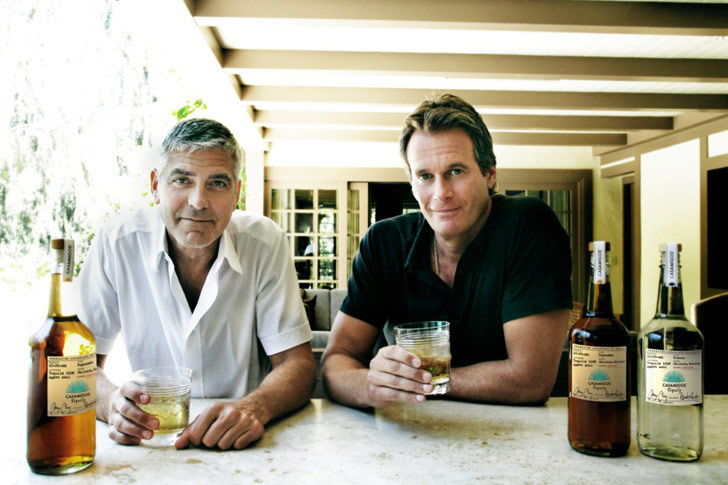 Thanks for the photo laetval. Although I don't think this is a good look for him. He looks tired from maybe too many sips of tequila.

That's taken in George's den......may have been taken before the
Tequila Campaign got under way ?

My daughter told me that her friend who works at a hotel called The Mansion in Dallas met GTC the other night while he was in town. She said he is the nicest celeb that she has ever met, and she meets a lot cause that's where they all like to stay.

The Mansion is part of the Rosewood Group, isn't it? So more or less the best hotels in the world are listed as theirs - Villa d'Este, the Ritz, Cipriani, Venice, the Dorchester............

No surprise that GTC is courteous and charming, is it? Do you remember Amara Miller saying that the best piece of advice he gave her was to be nice to people whoever they are?

Yes Party: Leading hotels of the world they belong to the list for sure. I have stayed in 3 of your mentioned ones.

There are better ones for the value. But if you just want to go and stay there to say you have stayed there, then it´s worthwhile.

Good advice, but hard to live by.

When you hear George talking about his background it seems he had a good grounding from his parents on how to treat people positively.

I like to watch him with the fans at Premieres and Awards as he is always happy to give them some attention....unlike many others.

@Katiedot wrote:And just 'cos I can, here's Casamigos tweeting us:

Can't stop laughing with this one ! Anyway they've got someone to answer quite a few tweets.

And now he's telling men what kind of books they ought to read : LINK

The cocktail you should be drinking tonight: ow.ly/gL2cA 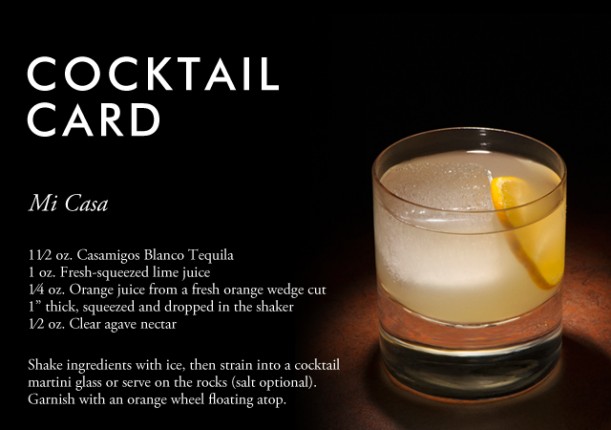 And the full info:

We took this classic drink and put our spin on it, using only the freshest ingredients and a tequila that can stand strong on its own. Serve it up this weekend. Salud.

Shake ingredients with ice, then strain into a cocktail martini glass or serve on the rocks (salt optional). Garnish with an orange wheel floating atop.

That sounds like the perfect drink for my cold!!!

Nah! Mel...perfect drink for your old is a couple of shots of fireball. I have that cold/flu and that stuff warms my throat right up. It does great things for my sinuses and my general attitude as well

Might taste great though.
If good quality, it will surpass others.
Clooney could have marketed refined quality, not shock-value sleaze to promote it.

Recipe for fireball please. You never know when you will get a cold.

I'm a HUGE tequila lover! I am looking forward to trying this when it hits the markets!

Fireball is actually a flavored whiskey Blubelle. It has a spicy, cinnamon flavor.

Damn he looks old and rough there. Go get the early bird special at your local club and then get home to get a good night's sleep G. We will make sure Einstein doesn't eat your slippers.

Good idea watching but he can´t.

He just put his dentures in the class.

Thank you OofOof. I'll have to check it out.

I got pregnant drinking whiskey once and I AM NOT taking that chance again!!! hahahahaha! Although OofOof, it certainly does sound good and I've got to take something to get rid of this damn cold, sore throat and runny nose!!!!

This is so off topic but I have been fighting a cold too.

I have been drinking a Hot Toddy that seems to help

It was very good. I even had it without the Rum in the middle of the day. Soothed my throat.

Truthfully (on topic) I am not a big tequila fan. Not sure their idea of moderately priced is in my price range.

I also don't understand why they are giving drink recipes when I thought the idea that this tequila is so good it shouldn't be mixed. JMO

@Best in Category wrote:Good idea watching but he can´t.

He just put his dentures in the class.

Looks like business is going well. Thanks to Henway for the link:

Casamigos is billed as a small-batch, 40%-abv Tequila made with 100% Blue Weber agave. Clooney and Gerber both number and sign each batch. The brand currently features Blanco ($42.99 a 750-ml.) and Reposado ($49.99) expressions. Casamigos will initially be available at select on-premise accounts, including the resorts and private clubs of Discovery Land Co., of which Meldman is founder and CEO.