@MM - can't find your quote regarding Stacy Keibler's teutonic heritage that I noticed you wrote recently.
However, she cannot speak German. Not even capable of pronouncing her last name phonetically correct. For in German, it's like "eye" not "eee." As in "Heil Hitler!" As a purely accoustic example.

When interviewed for German TV for some forgettable, albeit paying, non-entity red carpet event late last year, the German host asked Stacy Keibler if she's been to Germany or something by association.

"YAY, I'm German!"
The reporter then asked her from where did her ancestors hail?

Finally, she told him she couldn't utter a word of German.

(She can barely communicate in English, other than street slang, let alone other languages.) 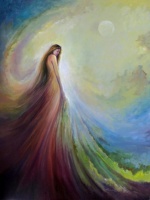 This isn't a thread about Stacy !

Yes, with all due respect, Joanna, my apologies.
I soiled it! Bad girl, I am!

It was in reference to a message on some other thread whether Stacy's Teutonic heritage means she speaks German & if those skills would be handy during the filming of Monuments Men...

Ok, I've moved these posts from the wrong thread to a thread of their own.

For what it's worth, Νιόβη, it's something some Americans seem to do - claim heritage to another country even though it's been generations since they've moved to the US.

It's not a big deal.

When Stacy was interviewed it was the German host who brought up her heritage. She may be third or fourth generation German, although she does seem to be proud of it.

I'm second generation German. My mother was born amd brought up in Stuttgart, Germany, although when she married she moved to the US. I know I'm proud of my heritage.

@ Νιόβη (Niobe): Here is my thread regarding my comments about Stacy's German heritage:

Yes, Katie, no matter where we live on this massive earth, we all claim our roots other than where we currently live. We are a society of immigrants.

Νιόβη wrote:Yes, with all due respect, Joanna, my apologies.
I soiled it! Bad girl, I am!

It was in reference to a message on some other thread whether Stacy's Teutonic heritage means she speaks German & if those skills would be handy during the filming of Monuments Men...

Jawohl she speaks! Hatte sie recht surely she can contribute a lot to the monuments men! So teutonic as she is, she can give the film the finishing "touch".

Sometimes these bilingual people struggle with both languages - please understand

Thank you for making me laugh, but you are right SK can barely speak one language let alone two languages. Thank you again, you have put a smile on my face for the rest of the day.

This is an interview in September 2011.
Now, there is no doubt, Stacy does not know the German language