Latest topics
» You Have to See This Incredible, Totally '80s George Clooney Photoshoot HE WASN'T ALWAYS THE SUAVE A-LISTER HE IS TODAY.

» Kentucky Native George Clooney On Breonna Taylor Decision: “The Justice System I Was Raised To Believe In Holds People Responsible For Their Actions”

Yesterday at 19:52 by annemarie

» Cast of Soggy Bottom Boys to Reunite in October 5 windows
on the larger side

the other one is waaayyy bigger

Wow those streets are narrow but lovely, nice place to live especially if you get to live in a villa like Oleandra. Thanks for the ride Joanna.

We already have a thread about his home so I'm moving these posts there.

LAGLIO, THE MAYOR BLINDA GEORGE CLOONEY,OFF LIMITS STREETS AND WATERS NEAR THE VILLA

Double anti curious order of the mayor. And 'forbidden to non-residents stand in the streets around the summer residence of the star and fines to those who sail in the lake of Como in less than a hundred meters from the coast
LUIGI BOLOGNINI

The George Clooney's villa in Laglio
Visit Laglio, a beautiful little village on the western shore of Lake Como. Visit it, but not all of it. Why the mayor has just banned non-residents to stay near the entrance to Villa Oleandra and Villa Margherita, the two summer residences of George Clooney. It has good weight also prohibited to navigate in 100 feet of water front. A decision forced by the crowds of onlookers and paparazzi who in recent years have created chaos in the streets of Laglio, lurking in ambush waiting for a movie star smile, a greeting, an autograph, and especially some compromising photo pilfered.

Already last year the mayor Roberto Pozzi, had issued an order prohibiting the groups in the area. "This time I made more stringent by prohibiting stopping even to individuals - he says - plus I also thought the water, not only to the earth. Forbidden by law to navigation 50 meters from the coast, I have doubled the distance: in that band you can not navigate or stop. " objectives remain the same, the paparazzi. "I have nothing against them or against journalists, indeed thank them because they spread the name of Laglio on Lake Como in the world. But you have to combine the freedom of information with security and privacy. And as long as it is the pilgrimage of people who come in just to see the area where he lives and hopes to bump into on the street is fine. But apart from that Clooney has the right to be left alone

like every other tourist on holiday from us, there is also the fact that the roads around his villa are small, if someone stops there captures everything: the same actor more than once could not leave with the bike from the garage, blocked by importunate. " Add to this, also the economic issue: the arrival of Clooney was a winning lottery ticket for Laglio and for the whole area. "Thanks to him more tourists arrive, the armature is increased, we made a lot of publicity" , Wells admits, it is clear that the goose that lays the golden eggs must be protected from hungry wolves. no coincidence that the measures do not apply to residents of Laglio, that the presence of Clooney have become accustomed (it is also an honorary citizen of the country) and leave quiet.

Ordinances that Mr. Nespresso has not requested but that certainly will like, which include fines are around 30 euro, "a figure more symbolic than anything else - Pozzi admits - but last year there were no sanctions, the effect deterrent enough to avoid problems, and the few people who tried to break them were good-naturedly turned away from the brigade. "

I guess because he goes they on a regular basis and nearly of the same month that people always try to catch him. He should change is routine LOL.

Didn't know he had to Villa's. Are they next to each other?

I didn't know he has two houses either.

they are on the same property, one behind the other.

melbert wrote:they are on the same property, one behind the other.

Thanks Melbert that's the first time I heard that unless CRS crept in again.

Start on page 1 here Mazy for some wonderful pics and vids!

3 houses plus one for housekeepers Elena and Anonio

Thanks for info it is not easy to find.

it's me wrote:3 houses plus one for housekeepers Elena and Anonio

Sorry it was Antonio

Or maybe it was only for Amaretti

Bacis from me too

Not sure if this is here before ? 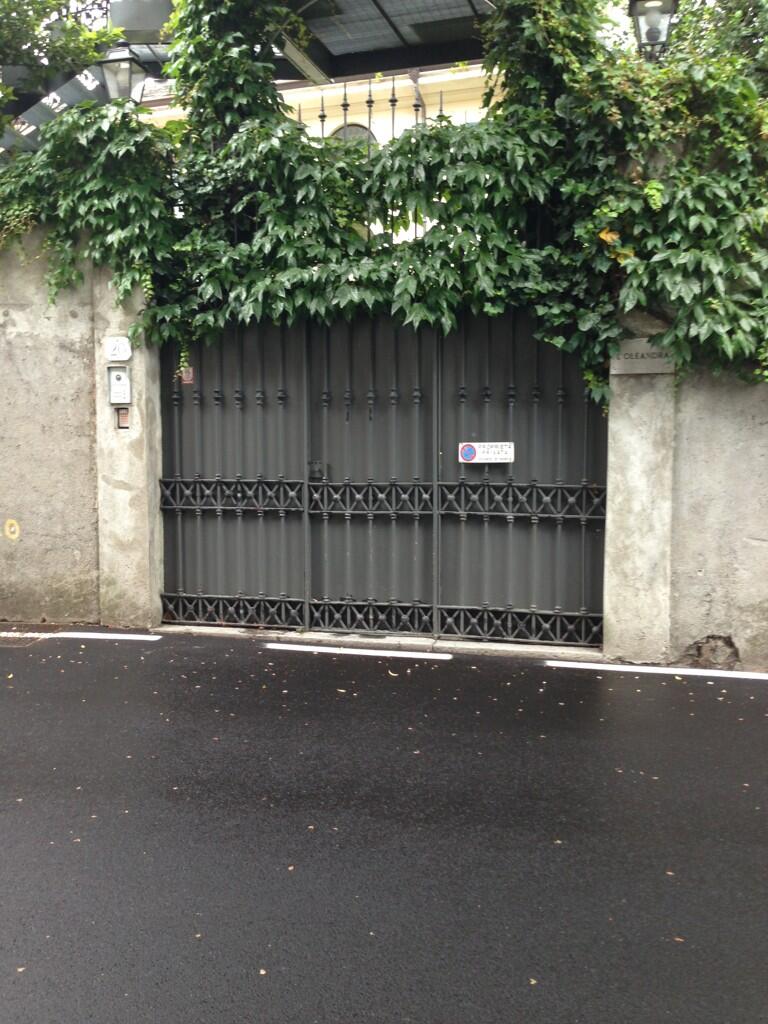 ....always popular with A lister's I'm told...this is going in the same direction as the SOCK!

So she didn't actually see him. She saw a gate!

Of course. But this is one of spots on a narrow road where people try to jump up to see if they can see anything. Video cameras in action at the very least. Pity the guy who lives there........

Yeah it's a shame LOL

the gate looks different. I have a picture of a gate (somewhere) that had an angled look to it. The call box was to the left like this one, but the gate itself angled out and back. If I can find it I'll try to figure out how to post it.

It also (at the time) didn't have a covering you could see inside, but I guess years of paps and the curious have made them cover the gates.

There are several, LD, but you still can't see anything.

Mark on the agenda
A festival dedicated to cinema landscape in an area that boasts some of the most beautiful landscapes of northern Italy. Among the most recent: "One day you have to go" by Giorgio Rights and "Life of Pi" by Ang Lee, then there are the classics that maybe we have already seen, but you want to put the satisfaction of seeing "Days of Heaven" by Terrence Malick in the square in Brunate funicular after a nice trip? The exhibition closes with "Slow Food Story" at the Cascina Respaù in the heart of the park of the Spina Verde. If you love the place as well as cinema projection know that it is time you take the 2x1: the landscape doubles, you will see it in 2 dimensions on the screen, but also all around.
Angela Maderna

I remember the one Lorna's talking about. You could see up the driveway to a small building, like maybe a garage? I think I have that picture somewhere too.

No boat in that picture ?

Katiedot wrote:A tourist's video of the exterior of his houses from a boat:

in the second video speaks a presenter.... them shouts and does not speak. simply terribly as she shouts there.

No boat but you have the UFO (read white gazebo)

Mm, noticed that too. Maybe the boat's in its own house, or berthed further to the left, or maybe His Nibs popped out for a pint of milk.........

HU maybe
After all he will surely drink some
Calcium
Right?

lovely view of georges lake como vila. wish I was there to visit with him. so peacful and beautiful. anway from all the hlwd. phonies. love this vila george, invite me over sometimes. bg

Maybe she posted an older pic maybe that's why it is not there. Or maybe they really put it away....Mystery?

or maybe it's around the corner at the dock?

Sure bec you can't see the dock!!