The A.V. Club website has ranked the top ten ER episodes of all time. Several mentions of George, including his showcase episode, "Hell and High Water".

Can't argue with any of those. This list makes me want to go back and watch my ER DVDs. Such a great show.

Just out of curiosity, did most people on here become fans of George's during ER, or later?

Missa wrote:Can't argue with any of those. This list makes me want to go back and watch my ER DVDs. Such a great show.

Just out of curiosity, did most people on here become fans of George's during ER, or later?

ER was when I first noticed him, and from that point on it was

ohhhh
how much I loved

Missa wrote:Just out of curiosity, did most people on here become fans of George's during ER, or later?

I only became a fan of GC right after he broke up with Sarah Larson.

Here's a vid of the first episode of ER where Carol Hathaway tries to commit suicide. You just have to click on UTube.

I remember Love's Labor Lost...my sister in law was pregnant and watching it upset her....

Oh and I was more of a Mark Green fan in the early years....

Love's Labor Lost is awful to watch, in a good way.

I actually was a fan of Chicago Hope, when it and ER started at the same time. I decided to check out ER when Chicago Hope was a rerun. The first scene I ever saw was Dr. Ross treating a child whose mother insisted was deaf because she couldn't hear the (imaginary) voices the mother could hear. And I was hooked.

I pretty much stopped watching after George left, although I did return to watch the episodes when the original cast members were leaving. I've always been surprised Eriq LaSalle didn't do more after the show; he gave what could have been a terrible character a lot of depth.

Loved him on ER.

Reading the article above, I actually "saw" the episodes in my head (since there's nothing else there - hahaha). I've been a Clooney Fan for a VERY long time, but ER cemented him for me.

I know I am resurrecting this old topic but oh well.

ER is where I fell certifiably in love with George. Especially after his character showed his caring side for children. That was it for me! The number one episode as far as the GC days will always and forever be Hell and High Water. That was such a launching point for GC! And the series for that matter! That is the most watched episode ever!

Then there is how they had him come back for Such Sweet Sorrow. Unannounced! That right there was amazing. There were millions of GC fans and Margulies fans everywhere who peed their pants when they saw that man standing on the dock. I KNOW I DID! 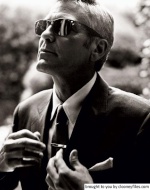 Right on Aflower!! We like it when old topics are resurrected! So please, have at it!

I remember that episode well, it was one of the best. They had incredible chemistry on that show.

His Nibs has alluded to the fact that being a paediatrician in the series really helped his career, hasn't he?!

PAN - Yes, I saw that in an interview he did somewhere, can't remember where.

Yeah I have heard also that he is grateful because of ER. Like he has to pay respects to what it has done for him. Of course, we have to pay our respects to him for what he has done for us also! Two way street!

But in all reality, I do feel like the show would NOT have been the same with another actor in Doug Ross' part. It was played so well by GC. Perhaps it was written around his personality some, I don't know. But, it was a perfect fit.

And I have heard that Doug and Carol were rated in a list of the all time best television couples. Of course us animal crackers fans would think so!

That is one of the things I like about George. A lot of actors who make it big in movies after being on TV, act as though they don't want to talk about their TV work and even belittle it. He never does and always seems to support fellow ER actors and other crew when they're being awarded something.

I would love to see him pop up on The Good Wife but know it's a pipe dream.

yeah! it was a perfect fit fot GC

Yeah. We all freak when he and Julianna Margulies are together. I think he would make a terrific lawyer on the show. Someone powerful perhaps?!

My favorite episode is Fathers and Sons. I hadn't seen it during it's first run but only when I lost my job and watched ER twice a day on TNT.

He is loyal to the show because he got John Wells to direct August Osage County. Oh and he showed up at his ceremony for his star on the walk of fame.