Firefighters stopped a fire about 75 miles east of Seattle from destroying more buildings in the past two days, fire spokesman Mark Grassel said Thursday. The blaze near the town of Cle Elum burned at least 70 homes, more than 200 outbuildings and about 35 square miles of wildland since it started Monday.

Crews focused on strengthening lines on the fire's stubborn north flank, where flames whipped through thick pine and fir forests in a steep, rugged area.

"They're really trying to button up that line so they feel more secure about it holding," Grassel said.

Laurie Plut said the fire has hovered right at the timber line, just beyond the wood cabin she and her husband have been building over the past 12 years.

"We're still worried. It's extremely frustrating, but the firefighters have been working hard," she said by telephone. "And we have to love them."

In Idaho, crews at 12 big fires worked to protect homes and build lines. Teams of firefighters arrived in Featherville to prepare for work against a huge wildfire that has been advancing on the small communities of Pine and Featherville.

Its progress stalled temporarily Thursday, giving residents time to protect homes and cabins and prepare for a possible evacuation. The blaze started two weeks ago in the Boise National Forest and has scorched more than 108 square miles.

In the eastern part of the state, a group of fires that burned more than 114 square miles finally slowed after it blazed through stands of timber killed by bark beetles. The fires were moving northeast, within three miles of the Montana border.

Thousands of firefighters were battling blazes throughout the West, which has been hit by hot, dry windy conditions in a fire season that officials said started early. Fire managers and state officials kept a nervous eye on forecasts that warned of more hot, dry weather with possible thunderstorms in many areas.

The ominous weather forecasts were cited by Oregon Gov. John Kitzhaber, who on Thursday declared a statewide state of emergency that authorizes use of National Guard helicopters to fight wildland blazes. He noted that much of his state was in extreme fire danger, the imminent threat of wildfire and mentioned a 123-square-mile blaze in southern Oregon.

Idaho Gov. C.L. "Butch" Otter already has issued a disaster declaration, clearing the way for the Idaho National Guard to get involved.

In Northern California, crews made progress along the northern edge of a fire that has burned 67 square miles in the Plumas National Forest. The blaze has threatened more than 900 homes and prompted voluntary evacuations.

It was among the largest of nearly a dozen major wildfires burning across California that kept more than 9,000 firefighters busy.

In northern San Diego County, a cluster of lightning-sparked fires kept residents from more than 100 homes in Ranchita and San Felipe.

About 30 miles to the northwest, a blaze in Riverside County neared containment. That fire destroyed four structures, injured six people, and burned more than 4 square miles east of Temecula.

Higher humidity helped at a huge wildfire burning on both sides of the Nevada-Oregon state line. The lightning-sparked blaze has burned 722 square miles of sagebrush. 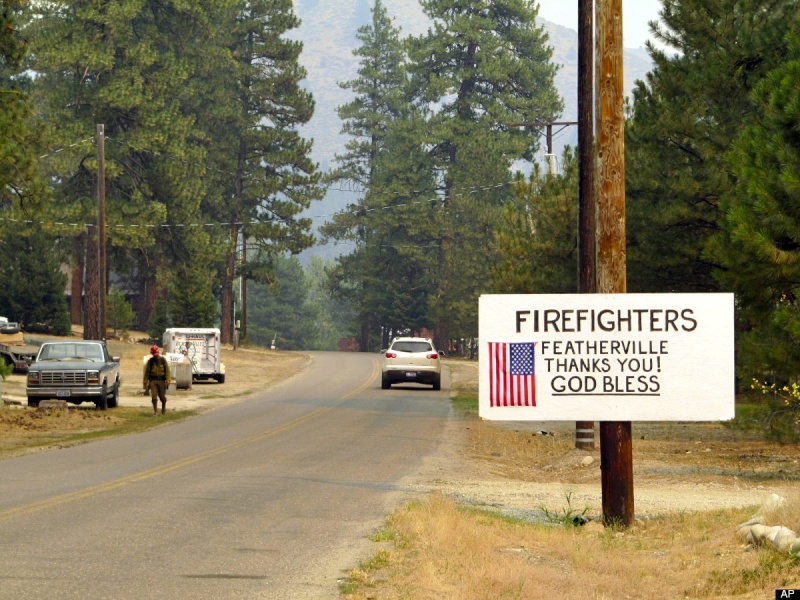 God help all of them!
thanks to FIREFIGHTERS too!!!

The fires are terrible here in Idaho. The smoke makes it very difficult to breathe. We appear to be safe here in the valley, but others are not so safe. My prayers to the firefighters - they are fighting a terrible battle.