» Nina and Nick Clooney out for lunch in Augusta

Singer-songwriter Gerry Rafferty, whose 1970s hits include "Baker Street" and "Stuck in the Middle With You," has died at age 63, his agent said on Tuesday

I used to love Stealers Wheel and everyday I still listen to Stuck in the Middle with You and Baker Street...

Ohh until I read the songs I didn't know who he was although the name rang a bell. RIP Gerry but we will always have his music.

That's really sad, they didn't say what he died from did they? RIP Gerry

Loved his music. Bakers Street is one of his best songs and I get "Stuck" stuck in my head a lot. LOL 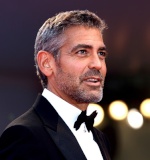 5 Jan 2011
Legendary Scottish singer-songwriter Gerry Rafferty, famed for the classic songs Baker Street and Stuck in The Middle, has died.

The Paisley-born musician, whose songs including Night Owl, Get It Right Next Time and Right Down The Line soundtracked the 1970s, had been admitted to the Royal Bournemouth Hospital last November with liver failure.

He passed away peacefully at home surrounded by family, his daughter Martha said yesterday.

It is understood his funeral will be held in Paisley later this month.

Son of a Scottish mother and an Irish father who began his career as a busker in the London Underground, he achieved world fame as a solo artist in the 1970s following stints in bands The Humblebums with comedian Billy Connolly, and Stealers Wheel, the soft rock band he formed in Paisley in 1972 with school friend Joe Egan.

His most successful albums were the saxophone-driven City To City in 1978 and Night Owl, released the following year.

Baker Street, with its haunting saxophone solo, was still netting him £80,000 a year more than 30 years after it reached number three in the UK charts in 1978.

Director Quentin Tarantino’s use of Stealers Wheel’s Stuck In The Middle in his cult 1992 film Reservoir Dogs exposed Rafferty to a new generation of fans. It had originally been a top 10 hit 19 years earlier.

But while remembered at his best as one of the greatest singer- songwriters Scotland has produced, he had a troubled career and past.

A former pupil of St Mirin’s Academy in Paisley, he played the town’s pub and club circuit at the start of his musical career.

When he was a child, his mother would drag him round the streets of Glasgow, rather than risk him suffering violence at the hands of his father, who would often come home drunk.

He endured battles with the music industry – once taking three years to disentangle contracts – and had been battling alcoholism for years.

In recent years, he was better known for alcohol-fuelled incidents, apparent disappearances and poor health than for his music.

He said: “It dawned on me that since Baker Street I had been touring the world, travelling everywhere and seeing nowhere. It wasn’t difficult for me to walk away from the business. Whatever I do in the future, it’s at my own pace, on my own terms.”

For the next three years, with his former wife Carla and daughter Martha, Rafferty travelled the world before returning to Sussex.

The family then lived quietly in a 17th-century house in the Sussex village of Hartfield, near Tunbridge Wells. Access to the estate was controlled by an electric gate and visitors were discouraged. The villagers rarely saw Rafferty.

In 1990, he was divorced from Carla, whom he met at a dancehall when she was 15 and married five years later.

She said: “There was no hope. I would never have left him if there’d been a glimmer of a chance of him recovering.”

Rafferty moved to California to be near Martha, before moving to Ireland in 2008 and later Dorset.

His last and final album, Another World, was released in 2000. It featured artwork by playwright and artist John Byrne – as well as stills taken by Paisley photographer Andrew Neil.

In 2001, in a rare interview, Rafferty admitted that he had gone out of his way to shun publicity. “I think that, from an early stage in my career, I was aware there were many, many pitfalls to so-called celebrity,” he said.

He hit the headlines two years ago when he trashed his room at the Westbury Hotel in London, where he had been staying for four days. He then checked himself out of London’s St Thomas’s hospital where he was receiving treatment for liver failure.

Last year while rumoured to be missing, he turned up alive and working on new material at his Tuscany home.

Rafferty is survived by his brother Jim, daughter Martha and granddaughter Celia.

Thanks Merlin for posting this. I had always wondered why he ducked out of sight after having such a brilliant rise with both of those albums. Very sad story indeed. He was so gifted, but once again alcohol plays a nasty role in ruining what was once a very gifted artist.

Bakers Street in particular is so hauntingly beautiful and soulful. So much feeling put into it's creation. Sad that his life ended like that.

Talking about Tuscany, Sting runs a bioshop there now.

Thanks Merlin - remembering his song well!